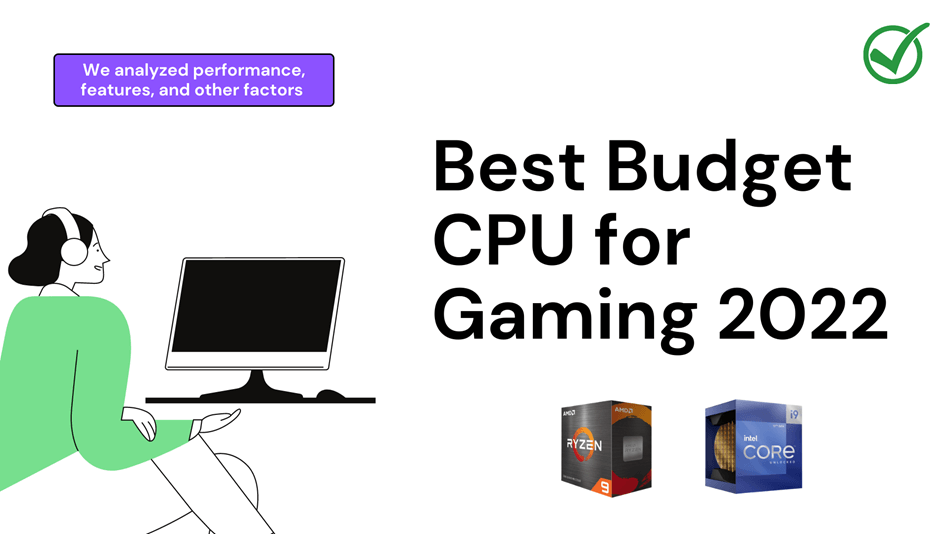 Today, we’re going to be discussing the best budget CPU for gaming in 2022. This will serve as a great guide for gamers who are looking for an affordable CPU that can handle all the tasks they need to get the most out of their gaming experience. Planning on playing games for hours on end? Then you need to invest in a budget CPU for gaming. This will allow you to get the best performance and save money on your next purchase. When it comes to CPUs, there are many different options available and it’s important to make the right decision. Not all CPUs are created equal when it comes to gaming. While some offer great performance and value, others may not be worth the investment. To find the best budget CPU for gaming in 2022, we looked at a variety of factors. We analyzed performance, features, and other factors to come up with our top pick.

The Best Budget CPU for Gaming are Listed Below:

We believe that the AMD Ryzen 5 7600X is currently the finest gaming CPU for the money. In our tests, we discovered that the Zen 4 processor delivers great gaming performance, comparable to the Ryzen 9 7900X’s far more powerful (and pricey) flagship chip. Our research revealed there to only be a couple of frames difference in AAA titles such as Horizon Zero Dawn and older games such as Dirt Rally. Strangely, the 7600X also outperformed the 7900X in Borderlands 3, although by a little margin of one frame per second. The 7600X is a fantastic gaming CPU for the price, it is undeniable.

With support for PCIe 5.0 and DDR5, the 7600X not only delivers exceptional performance but is also future-proof for the foreseeable future by working with cutting-edge RAM and SSDs. Unfortunately, DDR4 is not supported, therefore upgrading to the Ryzen 7000 Series will need you to change your RAM. The Ryzen 5’s poor multi-core performance is the one thing that should worry you in this situation. We advise choosing the similarly priced Intel Core i5-12600K instead if you like making cartoons or editing videos while you’re not playing games. The Intel provides a more well-rounded performance but isn’t quite as good at gaming.

The AMD Ryzen 5 7600X has just dethroned the Intel Core i5-12600K, which was previously our top-rated gaming CPU in terms of value. For some people, it’s still a viable choice. In contrast to the Ryzen, it supports DDR4 RAM, allowing you to update components gradually as opposed to all at once, which would be more costly. Modern DDR5 RAM and PCIe 5.0 SSDs may be used when you’re ready to upgrade to more costly components.

Additionally, the Intel i5 outperforms the Ryzen in multi-core performance, giving it a more flexible choice for folks who like editing video. Additionally, the Intel i5 still provides one of the greatest gaming performances, despite not being nearly as quick as the Ryzen. The new Raptor Lake series from Intel, which will be the start of the company’s next generation of processors, was recently unveiled, so it’s important to keep in mind. As a consequence, we advise holding out to see whether there are any discounts on the current crop of Intel chips or to check out the new ones.

The Intel Core i9-12900K is the company’s most potent gaming CPU to date, but we’re not sure its performance improvement over the i5-12600k is substantial enough to warrant that pricey chip simply for gaming. Instead, if you want a CPU for both content production and gaming, the Intel Core i9-12900K should be your top choice. Its multi-threaded power is really amazing, and the ingenious “hybrid architecture” excels at handling numerous activities at once, like playing a game while recording or streaming video. Although this chip isn’t inexpensive, you probably won’t need to change your CPU and motherboard for a very long time since it supports PCIe 5.0 and DDR5.

The AM4 architecture is one of the most successful CPU sockets in recent memory, and AMD’s transition from the disastrous Bulldozer CPUs to Ryzen was nothing short of spectacular. The Ryzen 5800X3D is a victory lap for AMD. The 5800X3D is the final hope for AM4, and owing to its 3D V-Cache, it delivers plenty of performance in gaming and multithreaded applications. Therefore, you couldn’t do much worse than pick up the Ryzen 7 5800X3D if you’re searching for a CPU to upgrade to but still want to keep your AM4 motherboard. Although expensive, it is the price you pay for top-notch performance.

Budget-conscious shoppers who missed out on the 3rd-generation Ryzen hype will value AMD’s most recent entry-level effort. The AMD Ryzen 3 3100 is undeniably attractively affordable, yet it does it without sacrificing performance. In fact, this chip performs virtually as well as CPUs costing two times as much while using less power. It’s also a great option for gamers on a budget who want something that can handle 1080p gaming.

You should give the AMD Ryzen 5 3600X a close to your heart if your budget for a gaming PC CPU has some room for expansion. Its price places it directly on the border between the mid-range and budget processor classes, and its six cores deliver some of the best performance in the mid-range processor class that we’ve ever seen. As a result, it technically qualifies for a spot on our list of the best cheap processors available.

We believe that the Intel Core i7-12700K is the finest CPU for gaming. This is so that the mid-range Alder Lake chip, which delivers faster and more power-efficient performance than ever before, can make full use of the hybrid design. Here, a 12-core processor with 20 threads is more than capable of handling taxing games and heavy multitasking tasks. Additionally, the newest DDR5 RAM standard and PCIe 5.0 compatibility directly benefit you. As of this writing, the only CPU generation that supports this technology is the 12th Gen Intel series. For improved gaming performance, this CPU also has a 5.0 GHz Turbo boost.

Why you should always choose the great CPU for gaming purposes?

In recent years, CPUs for gaming have become more and more popular. They offer a lot of performance for the money, and can handle many tasks at once. However, there are some very important factors to consider when choosing the best budget CPU for gaming. One of the most important factors is how much power your CPU has. A powerful CPU can handle multiple tasks at once and make gaming easier. Another important factor is price. A high-powered CPU costs more, but it will also run faster and be more effective at Gaming than a low-powered one. Finally, you should decide what type of gamer you are: an experienced one who wants the best performance or someone who just wants to play games casually.

Gaming is one of the most popular activities in the world and CPUs are one of the key appliances used for gaming. They play a big role in games and can give you a better performance than your current machine. Here is why you should always choose the great CPU for gaming purposes:

As the gaming industry grows and more people are turning to gaming laptops as their primary form of play, budget CPUs have become an increasingly important consideration. Many laptop manufacturers offer CPUs that are budget-friendly, but there are a few that stand out from the crowd. There are many great option for gamers who want to get the best performance without breaking the bank.

In conclusion, the best budget CPU for gaming in 2022 is all the listed above. This processor is affordable, powerful, and efficient, making it a great choice for new players and those who are looking to improve their gameplay experience. I hope you’re going to buy one now!