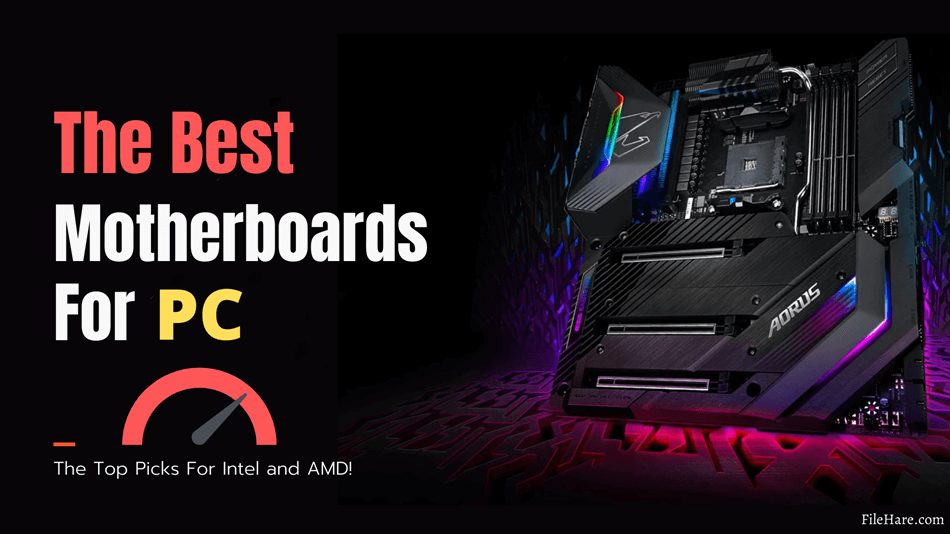 In this article, I will tell you the Top 10 Best Motherboard for PC. The motherboard is arguably the backbone of every PC and it holds the other components together. Talk about the CPU, RAM, GPU, and similar seemingly key components – none of these will work without the motherboard. But it is very easy to make the wrong choice when choosing a motherboard considering the myriad of options available. Thus it’s recommended you spend enough time perusing the best motherboards in order to pick the right match for your PC.

This is very important as it has a huge influence on other aspects of your PC build such as the case size, number of ports, storage drive options and so on. It will also determine what future upgrades you can make.

This is why we’ve created this list – to expose you to the Top 10 Best Motherboard for PC currently available. But before we hit the meat of the review, let’s look at some of the important considerations to make when choosing a motherboard.

What to Consider When Choosing a Motherboard

Before putting out your money for any motherboard, there are a few things to consider. Let’s review them quickly.

The socket is usually where the CPU “lives”. So, it’s important you pick a board with a socket that will support the CPU you wish to use. It’s usually indicated by the manufacturer.

Virtually all sockets are designed to accept either one of two CPUs – AMD or Intel. The three types of sockets in use today include PGA, LGA, and BGA. Intel CPUs usually require LGA, while AMD typically use PGA. BGAs are less common.

By memory support, we mean the type and amount of RAM the motherboard can accept. If you choose a motherboard with low RAM support, then you won’t be able to do much with it.

We highly recommend choosing a board that can accept at least up to 16 GB even if you’re not going to use that much memory initially. You can always upgrade later! By choosing a board high RAM support, you can use the PC for more demanding applications like games.

Form factor has to do with the physical size of the motherboard. Most of the boards available today belong to one of three size categories – ATX, micro-ATX, and mini-ATX. The ATX motherboards are full-sized and are the preferred choice for standard size builds. They also provide the most space for slots and connections. Micro-ATX are the medium-sized boards, a bit smaller than ATX, with less space for ports. The smallest motherboards are mini-ATX, and offer the least space for slots and ports. Generally, the smaller the motherboard, the lesser the number of ports and expansion slots.

Here’s a review of our top 10 motherboards for PC.

The ASUS H570-PRO with Wi-Fi 6 is targeted towards gaming PCs, specifically, Intel systems. It comes with everything you can expect from a standard motherboard and more.

Some of the top perks include 4x DDR4 slots with RAM support up to 128GB, an ATX form factor, LGA 1200 socket, varied USB ports, video ports, storage and expansion slots and a plethora of connectivity and networking options. Talking about connectivity, you get Bluetooth, Ethernet, and Wi-Fi.

The motherboard also has an impressive build quality and efficient cooling system that features built-in heatsinks and up to six headers for attaching case fans.

Moving on, we have the ASUS Maximus, another incredible motherboard specifically designed for Intel systems. With a chipset of Z590, enlarged VRM heatsink, and dual-channel memory support, the Maximus XIII is easily one of the best Intel motherboards out there. It comes with several USB ports including four M.2 SSD sockets, two Thunderbolt, Wi-Fi 6, PCIe 4.0, and a lot of RGB lighting. In addition to its incredible performance and speed, the board is very easy to overclock. The only downside it has according to most people is its high price tag, which doesn’t come as a big surprise given everything it brings to the table.

Overall, if you need a premium Intel motherboard that will not disappoint, then the ASUS Maximus XIII will make an excellent choice.

If you’re looking for a High performing AMD motherboard that competes favorably with more expensive models, then the ASRock B450 PRO4 is the way to go. It gets our vote as the best budget AMD motherboard and packs a lot of features you will normally find in motherboards that are twice its price. Some of these include speedy storage, several expansion slots, USB ports, up to 64GB memory support, and Micro ATX for factor.

Although the form factor is on the smaller side, it’s still able to fit 4 RAM and two M.2 slots. The chipset is B450, which is a latest generation chipset. While this might not go down well with everyone, it’s still powerful for the right application. Overall, the ASRock B450 PRO4 brings a lot of value to the table.

The MSI MPG Z590 is arguably the best premium Intel motherboard available right now. So, if you’re looking to build the ultimate Intel PC that can handle anything you bring to it, then you won’t go wrong with the MSI Z590. The major highlights of the board are the premium design and cutting-edge technology, which sets it apart from the crowd. As the name suggests, it uses the Z590 chipset, which happens to be the latest from Intel. This combined with its advanced memory and expansion slots ensure the board is blazingly fast – it’s basically speed on steroids. However, one of the problems with speedy motherboards is that they tend to heat up quickly. To counter this, the MSI MPG Z590 employs a premium heat sink consisting of six 4-pin fan headers. The M.2 slot also got its own heat sink.

Godlike is another high-end Intel motherboard that packs a lot of interesting features you won’t normally find in most standard models. Top on the list of its perks are easy overclocking in BIOS, onboard Thunderbolt video output, and an excellent build quality. As the name suggests, it comes equipped with the Intel Z590 chipset and M.2 xpander, and offers up to 128GB of memory support consisting of four DIMM sockets. It also has an efficient heatsink system for excellent thermal solution, easy setup and diagnostic s, and of course an incredible overclocking performance. The main downside with the board is that it’s very expensive and use two 8-pin CPU power connectors. But we can’t complain much given its topnotch performance.

Overall, if you’re planning to build an Intel PC, and want to invest in the best motherboard and money is no object, then the Z490 Godlike will make a great choice.

The Asus ROG gets our vote as the best mini-ITX motherboard currently available in the market. It is a full featured board that can take almost anything you throw at it, especially when used with 11th-gen chips. It comes equipped with an LGA 1200 socket, dual channel memory support (DDR4-5133), and AI overclocking. It can be seen as a medium to high-end model depending on the application. Other notable features of the motherboard include two M.2 slots, four SATA 6Gb/s ports, AI cooling, Aura Sync RGB lighting, excellent audio, and superb network performance.

We also found it very attractive – thanks to its black finish, diagonal mesh lines and an ROG logo illuminated by RGB lighting. However, despite its AI noise cancellation feature, the board is still a bit noisy.

The ASRock X570 is another top contender for the best AMD motherboard. So, if you plan is to build an AMD system, then this is a great choice. The board’s USP borders on its aesthetics (it’s hard not to notice it’s beautiful design), easy installation, and excellent cooling system. It comes equipped with an ATX form factor so you get a lot of space for ports and slots for peripherals. There are four DIMM sockets for upto 128GB memory support, which is simply amazing. For the chipset, it uses the AMD Premium X570 while GPU support is multifaceted with support for NVIDIA NVLink, Quad SLI, and AMD 3-Way CrossFIreX. It’s perfect for overclockers and provides Wi-Fi 6 support. That said, it can be a bit tricky to upgrade storage.

We recommend the Aorus X570 for three main reasons. First, the design is well thought out. Second, it features a pre-installed I/O shield, and thirdly, it’s reasonably priced. From our assessment, it’s arguably the best high-performance AMD motherboard out there. It has a form factor of ATX and memory support with four DIMM sockets for up to 128GB. Aesthetics-wise, the board body is all black with splashes of silver and beautiful RGB lighting. So, it’s definitely one to catch your fancy! We also find it quite interesting that the board supports multiple GPUs and the latest 3rd gen AMD processors, which makes it future-proof. As earlier indicated, the I/O ports are shielded as well as the WiFi 6. We could go on and on. You get all these for a price that is significantly lesser than the price of many high-end Intel motherboards. It doesn’t get better than this!

For just around $100, the ASRock B450 packs a number of cool features that makes it another great budget-friendly motherboard. While it isn’t as sophisticated as some of the models we’ve previously reviewed, it still performs incredibly well and has an unbeatable quality. It’s compatible with AMD RYZEN 3000 but can also support 5000 series CPUs when updated. This makes it the board to go for if you want something that is future-proof. Some of its key features include two PCI-E 3.0 slots, simple BIOS layout, M.2 support, easy installation, and many more.

Our next selection for the Top 10 Best Motherboard for PC is the Gigabyte B460M DS3H V2, which goes for less than $90. It’s without doubt the best budget Intel motherboard we’ve come across with a highly performant chipset. Despite having such a low price tag, it has some really cool features that puts it on the same level with some more expensive motherboards.

Some of these include an LGA 1200 socket, a Gigabit Ethernet, several expansion slots and video ports, and of course, memory support for up to 128GB RAM with 4x DDR4 slots.

The board supports 10th and 11th generation Intel CPUs. If you intend to use it with the 11th-gen CPU, it will need a BIOS update. For the form factor, it’s equipped with a midsized micro ATX which translates to a smaller footprint.